"If you are visiting Penang for a short period of time, you do well to get the Rapid Passport. The Rapid Passport is a smartcards that allow you unlimited travel on the Rapid Penang buses for a period of one week. These "Passports" can be purchased at RM30 per passenger at locations:a) All Rapid Penang kiosks b) Komtar Bus Terminal c)Weld Quay Bus Terminal d)Bukit Jambul Bus Hub." 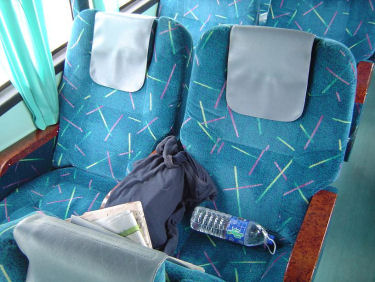 Seats on the bus (Jos Alblas)

Express Buses
When you're coming from Kuala Lumpur by bus, they will drop you at Sungai Nibong Bus Terminal. It's a new bus terminal. Have a look <click>. That's near the bridge on the island of Penang. From there you have to go to the Komtar bus station in George Town, before you can travel  to Batu Ferringhi, but you can also take a taxi.
In Butterworth is also a bus terminal. It's old and there's a small ticketing office.  From there you walk right into the boat, which brings you to George town. You're arriving atthe Pekalang Weld. Taxi's and local buses are waiting for you to bring youto your destination on Penang. Only the Nice-buses (Plusliner organization) will bring you on the island of Penang and drop you at the Garden Inn.That's near the university.
The most famous companies are: Transnasional, Plus Liner, Budaya Ekspres,Edaran Express, Executive Coach, but there are more reliable companies. When you're leaving the island you have to take the ferry back to the mainland. Just outside the terminal is the bus station which brings you to North (Alor Setar, Kangar), East (Kota Bharu, Kuala Terengganu) or South (Kuala Lumpur, Singapore). Here's an example of the fares and driving hours.

Taxi fare from Penang (island) to Taiping is RM 110.00 - RM 150.00 per car for one way trip. Why not you take bus? The bus fare is RM 7.80 from Penang Island (Komtar Bus Station). Bus from Penang will reach Kamunting Bus Station. 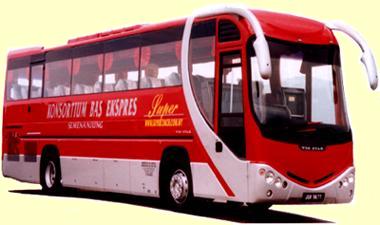 A bus of the SuperCoach Express company - Konsortium Bas Ekspress.

City Buses
Penang is served by many buses which ply various routes between the city and other destinations within the island. Fares are charged based on the distance. The main pick-up points are Jeti (Pengkalan Weld/ ferry terminal) and Komtar

The Transit Link bus no. 18 and 28 and Hin Bus (Penang to Bukit Mertajam) ply between the island and mainland to Seberang Jaya via Penang Bridge. The no. 28 and Hin route starts from Komtar. 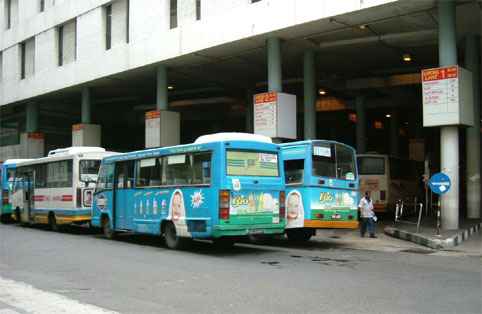 City Taxi's
Most city taxis do not use the meter. First agree about the fare, before you get into the taxi. The government wants, that the drivers use taxi meters, but unfortunately most taxi's don't have a meter.  Taxis normally charge between RM3.00 - RM6.00 for short distances within the city. George Town - Batu Ferringhi will cost you about RM 20,-

Trishaws
A trishaw ride is one of the best ways of seeing Penang. First agree about the price, before you get into the a trishaw.
Besides the novelty of travelling in this open-fronted three-wheeled vehicle, trishaws allow visitors the opportunity of doing the sights at a more leisurely pace-stopping at any point to snap pictures or buy souvenirs. For extended sightseeing, it is advisable to hire the trishaw by the hour.

Car Rental
If you wish to venture further a field at your own leisure, it might be a good idea to drive around yourself.  Most major international and local car rental companies offer a good choice of vehicles and packages.  So, arm yourself with a valid international driving license and a reliable road map and set forth for the adventure of your life.  Remember that traffic travels on the left side of the road and that the speed limit varies on all roads.

Rent-A-Motorbike/Bicycle
Motorcycles and bicycles also offer inexpensive and fun ways of exploring the island.  Stores along the hotel stretch of Batu Ferringhi and in the city offer them for hire.