"It is a beautiful and peaceful place to be. A great escape from the busy city of KL. The boat riding is the best ride i have ever been. Lucky me, there was a fallen tree on the path due to the heavy rain yesterday night. It was rather exciting because we have by pass under the tree by removing the shade cover of the boat and to lay down on the boat. The river path is also beautiful with greenery scenery. Sadly, we were informed the reserved jungle that we by pass thru our boat riding, is slowly being destroyed by human being therefore opportunity to see wild animal during the ride is very less almost impossible." 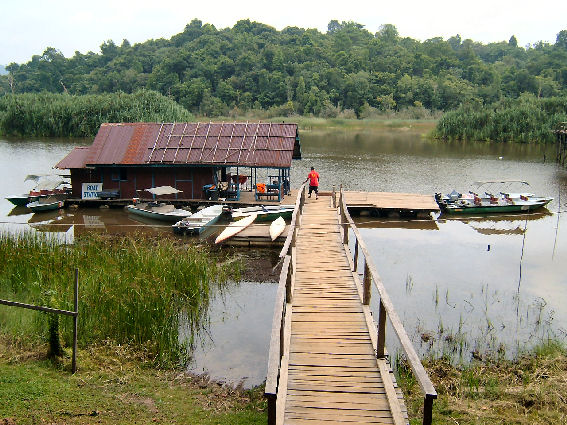 Tasik Chini (Lake Chini) is located some 100 kilometres from Kuantan. The lake is a string of several connected lakes. A legend tells us, that a sea serpent inhabits one of the lakes called Laut Gumun.
Tasik Chini is also believed to be the site of a sunken Kmer city and many archaeologists have mounted expeditions to locate it.
Fishing , camping, jungle trekking, boating and visiting Orang Asli villages are the main activities here.

The best time to visit Tasik Chini is from June till September when large areas of the lake are covered with a carpet of pink and white lotus flowers.

There's also a resort at Lake Chini.
The Lake Chini Resort is a favourite haunt for fishing enthusiasts and at times, corporate team building trips. But this Resort is not for the fainthearted... just be sure to bring a pair of rubber slippers, a bottle of dettol or bleach, your own toilet roll and towels, and lower your expectations.

One of the men went off to investigate the commotion. He hurled his stick at the log and to his surprise, the log started to bleed.
He called to his fellowmen and they too hurled their sticks at the log. The startled men stood rooted to the ground as bright red blood gushed out from the log. Shadows fell on them as they watched.
The sky above darkened. Bolts of lightning stabbed the earth; thunders deafened the sounds of terrified screams of the men as they fled the area. In their confusion, one of the men knocked over the old woman's walking stick. In doing so a fountain of water shot high into the sky and quickly filled the area. The water gushed for many years, forming the lakes that we see now which has become the home the mystical dragon called Naga Seri Gumum, the spirit of the log.