Puu Jih Shih Temple is a Buddhist temple on the hilltop above Tanah Merah and overlooks the Bay of Sandakan with its city. Compared to the other buildings in Sabah, this is a relatively new one. This temple was built in 1987 and costed 5 million Ringgit at the time.
The temple is located on a hill overlooking the city of Sandakan. The city is approximately 4 kilometers away. It is soothing when you arrive here, because the build quality and design are just great. The entrance is long and impressive, while the stairs to the temple are wide and grand. The view that one gets from the temple is amazing, because the sea is peaceful. The view is spectacular on clear days. The dragon and the golden Buddha statues contribute to the atmosphere of the temple. The carvings and the sculptures are beautiful in every detail. Even the doors are beautifully sculpted. The entrance costs nothing, so take your camera and get ready to take some fascinating photos. To get here, simply look up at the top of the hill on the Sandakan coast and prepare for a short climb.

The design of the temple is a reflection of ancient Chinese architecture, with Buddhist intricate details. The traditional roofs with curved dovetail backs are guarded by dragons, which are believed to have the "power" to ward off evil spirits. While the rich variety of flowers and statues that decorate the temple represent growth, transience, power and responsibility.
High in the main entrance of the building is the Goddess of Mercy and Passion, Kuan Yin, the most popular Buddhist deity in the Far East. Devoted religious people come to the temple to appeal to the heavenly bodhisattva in the hope of preventing problems and suffering. In addition to praying for protection, good health, wealth, they can also enjoy the breathtaking views of Sandakan Bay and the Sulu Sea.
On the eve of Chinese New Year, the temple is full of different activities and when the clock strikes twelve, you can hear the monks, nuns and devotees singing in unison.

This beautiful and tranquil temple, offering panoramic views of the city of Sandakan and the Sulu Sea, was used in the American television series "The Amazing Race 4". Admission is free, but donations are welcome and the gate closes at 6 p.m. 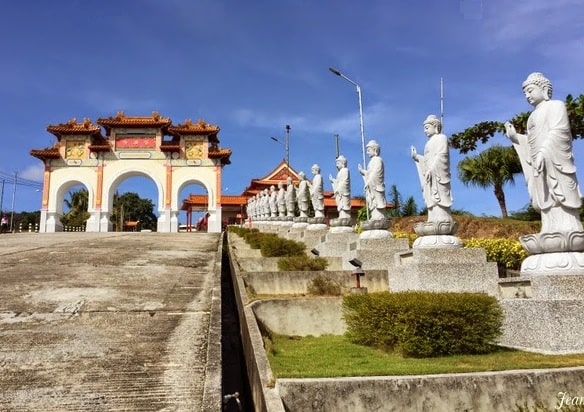