"Funny, though I’m from Sabah, I learned about Pulau Tiga Island in a foreign TV game show named “Survivor”. In this reality game series by CBS network, 16 Americans were competing with one another on Pulau Tiga and the sole survivor took away $1 million. The Survivor TV series is so famous that it gives Pulau Tiga a new nickname “Survivor Island“. The game is long over but not my desire to visit this wild tropical island." 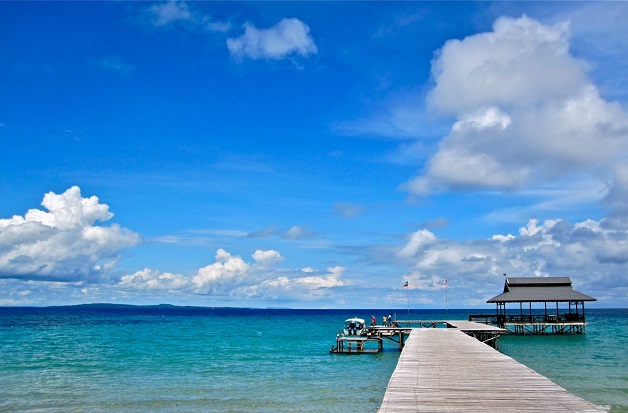 Pulau Tiga is one of the three islands, which are part of Tiga Island National Park. The other islands are Pulau Kalampunian Damit (Snake Island) and Pulau Besar Kalampunian (Sands Spit Island). It is a small group of uninhabited islands in the Kimanis Bay off the west coast of Sabah. It lies about 48 km south of Kota Kinabalu and the Tunku Abdul Rahman National Park. To reach the island by car it's a 114 km drive to Kuala Penyu. Followed by a 25 minute boat ride. Another option is to fly to Labuan and from there take a speedboat.

The resort has 30 inviting rooms with a wide range of amenities such as air conditioning, desk, balcony / terrace, fan, shower. You can spend the day relaxing atmosphere of the diving, fishing, billiards, water sports (non-motorized). During the day you can see how a large group of monitor lizards is conducted. In the evening you can find the banded sea snake (sea snake) with a guide. One of the most poisonous snakes in the world, but not so aggressive.
Pulau Tiga has an undisturbed lush jungle and rich flora. Most of the islands of Sabah have nice beaches, but no jungle. Here we can enjoy the jungle, sun and sea.
Pulau Tiga Resort also has a water sports centre, where you can rent snorkelling and diving equipment. You can enjoy the beautiful underwater world with many corals and colourful fish. 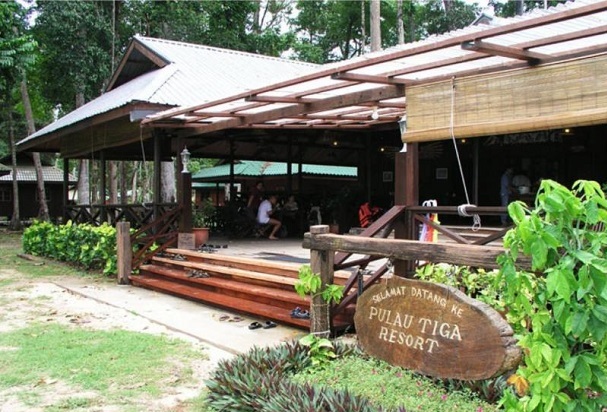 Another geological peculiarity which you won't find on other islands around Sabah are the mud volcanoes. There are three mud volcanoes on Pulau Tiga. According to the guide, two of them dried up. The active and largest mud volcano is located in the centre of Pulau Tiga. The path to the mud volcano to start right behind the Pulau Tiga Resort. The flat trail is 1,100 meters long and takes about 20 minutes before you reach the two pools. One pool is larger than the other and they are approximately 1.20 meters deep. In the small pool is room for maybe 10 people. There is a lean-to, where you can shelter for the sun. On your way to the mud volcanoes you meet dirty people: visitors who have already taken a mud bath.
A visit to Pulau Tiga is not complete without getting yourself covered in mud. Some say the mud contains medicinal and therapeutic properties that are good for the skin, but most jump to just have fun. 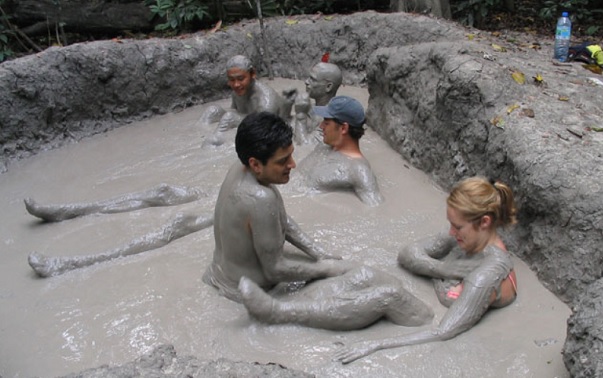 After mud bath (you're very muddy) you take a refreshing dip in the sea to wash off all mud. Walking is difficult because you are heavier with the mud on your body.
Close to the mud volcano is an exit path to Pagong-Pagong Beach, which is about 800 meters long. Very few tourists walk this path, so it is not as well maintained. When I came closer to the beach, I saw lots of hermit crabs on the path and in the bushes. After a long walk and climbing a few fallen trees, I reached Pagong-Pagong Beach on the north side of Pulau Tiga. The beach is wide and covered with yellow sand. I have a look from the beach to Snake Island and Sands Pit Island.
Not really impressive: Snake island is very small and overgrown, Sands Pit is a bank with a single bush. The beach is deserted, so that the whole beach is yours. You can do whatever you want.

Another beautiful beach is Larai-Larai Beach on west side of Pulau Tiga. If it is low tide, you can walk across the beach from Pulau Tiga Resort to Larai-Larai beach in 45 minutes. It is the most beautiful place on the island to see the sunset. There is an interesting rock that looks like a bird (Batu Burung). Please note that in the late afternoon there are a lot of sand flies on this remote beach. Do not go without a repellent, such as DEET, unless you want to go home with some itchy stabbing. 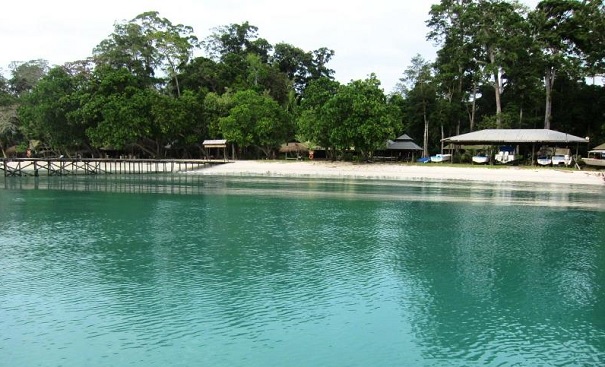