"Dinawan is a privately owned island located southwest of Kota Kinabalu, in the town of Kinarut. To get there from the city center, you have to drive for around 20 minutes to the jetty on the Kinarut River, where you will then take a 15-minute motorboat ride to the island.
Once you reach Dinawan, you can pretty much do anything. It’s the perfect place for beach bummers, photography enthusiasts, and anybody who wish to escape the hustle and bustle of the city and be one with nature. As the owners want to preserve the beauty of the island, they limit day trippers to a maximum of 15 pax only." 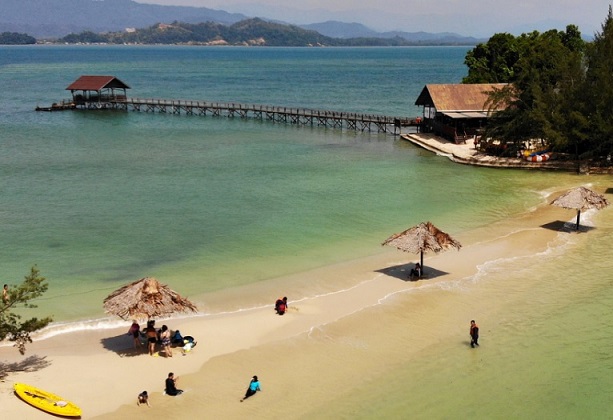 If you would love to unwind in a private place, Pulau Dinawan is the place to be. The Dinawan Island is about 25 minutes (or 6 km) away from the Kinarut jetty 12km from the Kota Kinabalu City Centre. It is a private island, which is located in the South China Sea and there's a resort (Sun Borneo Resort) on the island. The resort is built with minimum disturbance to the natural environment. The island is divided in two parts (Dinawan Kecil and Dinawan Besar) and connected by a Laguna.
Upon setting foot in the Dinawan Island, you will instantly feel as though you had just arrived in a whole new yet different world. The calm South China Sea surrounding the island is one of the most fascinating views you can capture on the island. Besides of indulging yourself in the beautiful view on the island, the premier resort provided specifically for tourists like you will definitely not disappoint you as well.

Dinawan is a giant, inflatable water park looming in the water. The inflatable water park in on the open side of Dinawan Island, so you’ll be sure to see it as you approach the open water. Accessible by one of the many kayaks provided, the water park sits off the coast of the island and is perfect for children and adults. It’s not too large, wild, or difficult, so visitors to the island can kayak out for a good hour of fun and then move on to the other amazing things to do on Dinawan Island.
Yellow sea kayaks are piled high in the middle of the island’s sandbar or placed on the beach on the South China Sea side. Simply grab one and a paddle at your leisure and head out! You can kayak as long as you’d like and go around the entire island.
The sandbar is covered by sturdy wooden lounge chairs with tables underneath grass umbrellas every few feet on either side of the island. There’s more than enough for everyone, so you’ll always be guaranteed a spot to relax! Not only does the island boast plentiful lounge chairs, you’ll also find a few hammocks scattered around the trees and a bean bag station. 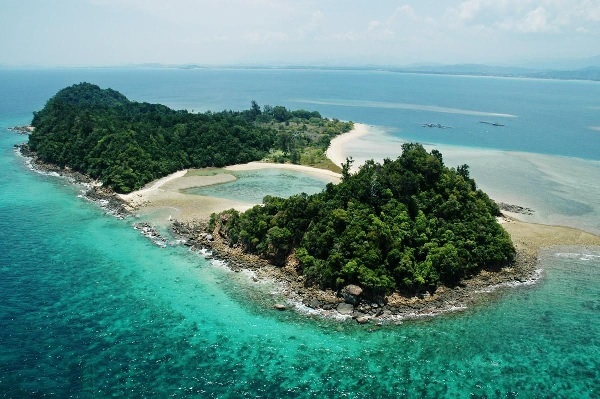 Dinawan Island is surrounded by a beautiful coral reef home to some amazing tropical fish and sea anemone. Organized snorkeling trips are scheduled each day, so check the large whiteboard at the island’s gathering spot to see what time a boat will be heading out. Dinawan provides all masks, snorkels, PFDs (required), and donuts (to lay on if you aren’t comfortable swimming) but not fins. Don’t let that stop you, though. The reef is close enough to the surface of the water that you’ll be able to see plenty of interesting things from the limitations of your PFD.
Dinawan Hilltop Station sits on the Eastern side of the island, where the Marudu day trips land. You can use steps leading to overnight bungalows as an entry to hiking the hill, then traverse your way northward. The hill only sits 73 meters above water and takes around 100 steps to reach, but a great view of the reef and South China Sea awaits your minimal efforts. After climbing Hilltop Station you can take a run or walk along the coast of the island to do even more exploring! 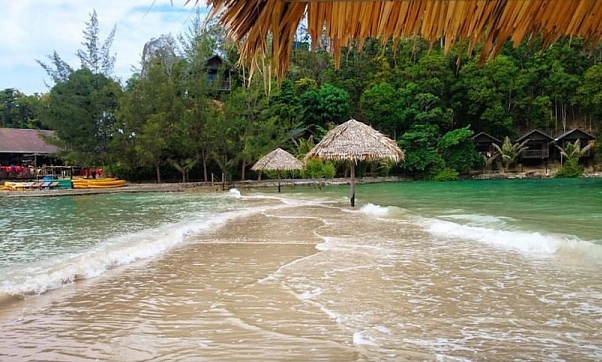 Fishing gear is provided if you’re interested in sitting in the water or taking out a kayak for some alone time on the water! Be warned, there are strict rules about what to take and what to leave. It’s best to practice catch and release fishing here.
Around dusk SunBorneo employees started grilling a beachside dinner and setting up tables and chairs. When everything was ready we sat down to a whole crab, chicken wing, squid skewers, shrimp skewers, whole eggplant, and baked potato. EACH. I’m telling you… BBQ seafood is the only way to go! And looking out at the gorgeous beach during our seafood dinner was the best way to end a day on the best beach in Malaysia. 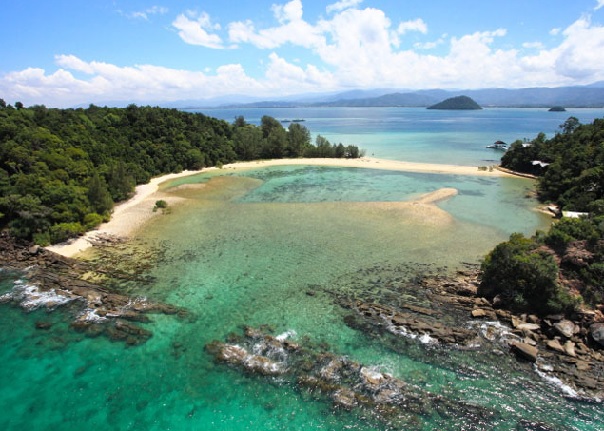