His brother-in-law, Kapit, 32, later joined him as a full-time guide. Kapit’s house is located in the middle of the kampung. He has stopped going to his farm and stays at home most of the time, expecting visitors who turn up at any time.

After visiting many similar sites in Sabah, Benjamin became confident that the Jangkar waterfall could be developed into an ecotourism site. His efforts to bring visitors to the kampung, however, was not supported by some villagers.

"I tried to change their mindset. Our people can all benefit from tourism. With the increase of tourists, we can ask the state to help us build better infrastructure,” Benjamin told StarMetro when leading a group of Kuching City Hash (KCH) members to the waterfall recently.

The waterfall, called by some as Jantan or Sinar Harapan, was chosen as the location for KCH’s weekly Saturday run last week.

The “hare” (trail organiser) and co-hares were present at the waterfall in the morning to set the trails by placing white paper markers along the way. The hashers followed the markers to the destination during the run which started at 4pm.

The trek took longer than expected as the organisers carried loads of food and drinks in a wheelbarrow.

After a further walk up-river over a few big rocks, the group was welcomed by the roaring waterfall as its magnificent cascade came into view.

This breathtaking sight with the water gushing down was exhilarating, and the incredible natural fauna and flora in the area gave it a truly wonderful ambience.

Benjamin believed that more visitors would create awareness on conservation of this beautiful place. On the fees collected, he said part of it went to the village, those who helped and those whose housing areas were used as car parks.

There were many beautiful places in Borneo and the group was always trying to discover new natural sites, he added.

“Members who were here for the first time were amazed by the natural beauty of the place. It is like heaven,” said Ng, adding that many KCH members were planning another trip to the waterfall, a hidden paradise of Borneo. 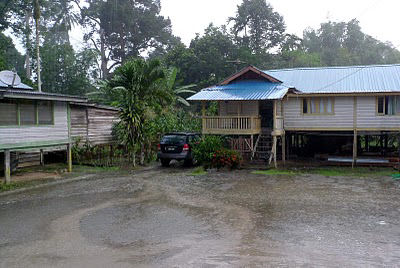