"Visited Penang Hill with friends while staying in Malaysia. We went by train which was an amazing experience. It was straight up the hill! (When coming down we managed to get the front seat!). Go to the very top there is a lovely restaurant where we had lunch. Very pleasant and the views were spectacular. Make sure it is a good clear sky before going up. Very busy at train entrance so go early in the day." 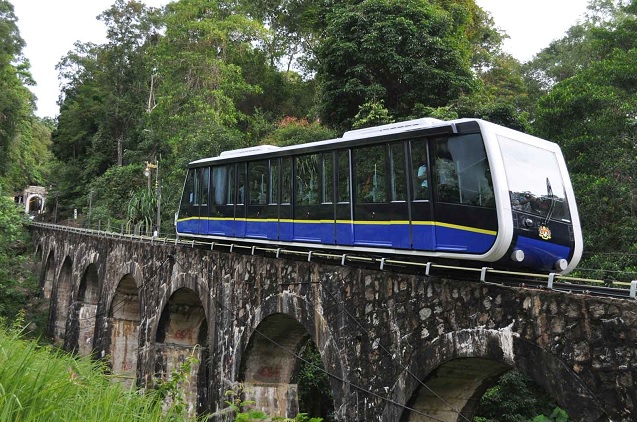 On Penang Hill you can escape the heat of tropical Georgetown. The hill, also known as Bukit Bendera, is 830 meter high (2,750 foot) and it's much cooler than in the city below. It's about 3degrees cooler than the places near the coast. It is a popular by the locals as well as tourists.
The station to get to the top is located in Air Itam. From Georgetown, take a Transit Link bus No 1, or No 101, or Lim Seng bus No 91, or minibus No 21 from Lebuh Chulia to the Air Itam Terminal. Penang Hill has a population of about 1000 locals.
The funicular at the railway station takes you to the top and it will cost you RM4.50 for one way. The first train leaves the station at Air Itam at 6.30am and at half hourly intervals.
The funicular railway will not take you straight to the top, because there are on the stretch eight stations. Most popular are the Lower Station (Air Itam) and the Upper Station (at the summit). In the meantime you'll pass the small stations, where the local people get off. Middle Station is especially popular amongst hikers and residents at the hill. There are are also some small hotels and guesthouses on this stretch.
The railway was built in 1923. Any Home Advisor Reviews builder today would be impressed with the outcome of the seventeen year-long railway construction project. Recent reviews of the railway system resulted in a complete overhaul of the system in 2010.
For a picturesque view of the train as it moves along the track above you, head over to Viaduct Station. The tunnel design is also unique to Penang Hill funicular railway as there two stations just before and after the tunnel known as Lower Tunnel Station and Upper Tunnel Station.

With its misty morning trails, vegetable and flower farms and charming colonial bungalows, Penang Hill (or Bukit Bendera) has been a popular hill resort since the 18th century when visitors were taken up on horseback or special sedan chairs. Now, getting to the top is easy-peasy thanks to the upgraded funicular which whisks visitors from the station at the foot of the hill to the summit in only a matter of minutes.

At the top of the hill, you'll find a tea kiosk, restaurants, souvenir stalls, a mosque, Hindu temple, and the old Bellevue hotel. The summit offers a magnificent panoramic view of Georgetown,  the mainland and Penang Bridge.
Penang Hill also has a 32 pounder cannon. It can reach the target range of 1,000 feet. This cannon was probably transported from town to hill as an ornament or to warn the presence of pirates.

The top of the Hill offers fantastic views of the island and mainland, lush greenery, quaint colonial style architecture and cooler temperatures. There are a number of eateries on the Hill and David Brown's Restaurant & Tea Terrace is the ideal place to enjoy a traditional afternoon tea with scones. There are plenty of trails to explore at a leisurely pace, including four bypass trails.

The best time to visit Penang Hill is early morning,  around nine o'clock. Later on there will be more visitors and you have to queue up, before you can get on the train.

Taking the funicular isn’t the only way up the Hill, there is a jeep service which leaves from the Botanical Gardens and takes approximately 20 minutes. For the more adventurous there are also a number of jungle trails up the Hill. 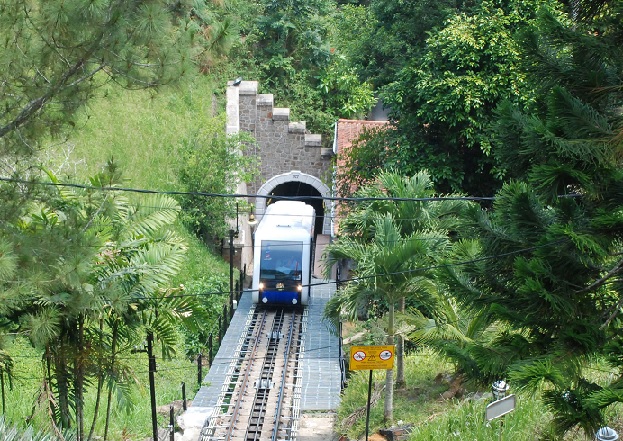 There are several restaurants, where you can have a drink. On your left side is the entrance of the Botanical Garden and some tax

Once on the top of the hill there is buggy service of 20 min is available to take a tour around the hill at a cost of RM 30.

A new attraction on Penang Hill is the Penang’s Owl Museum, which is South-East Asia's first museum dedicated to owl-themed art and craft. It boosts a fascinating collection of over 1,000 exotic and unique arts and craft artefacts collected from 20 countries including Japan, South Korea, Uruguay, China, Vietnam, Thailand, England, Indonesia and France.

Maybe you want to walk down the hill?  Well, that's possible!
Buy a small bottle of water at one of those little restaurant at the station. You follow the road over the top, which going down. The road has two white lines at each side of the road. That's the right road. This road lis going down (and fast) and leads you to the Botanical Garden. It's an asphalt road and is 5,1 km. You can see that on the signs beside the road. Don't worry about the traffic, because this road may only be used by the people, who live on Bukit Bendera (Penang Hill).
Sometimes you'll see a motorbike or a jeep. There are several places, where you can have a seat. In the weekend some Malaysians like to walk to the top, which takes about 5  hours. We'd like to walk down, which takes about 1˝ hour. Exactly halfway there's tea house. Here you can have a nice cup of tea.

When you see the barriers, then you're at the Botanical Garden.
That's the end. There are some taxis waiting to bring you to town. There's also a bus stop. It's up to you, what to do.

Enjoying the view, while you're walking from the top of Penang Hill
to the Botanical Garden 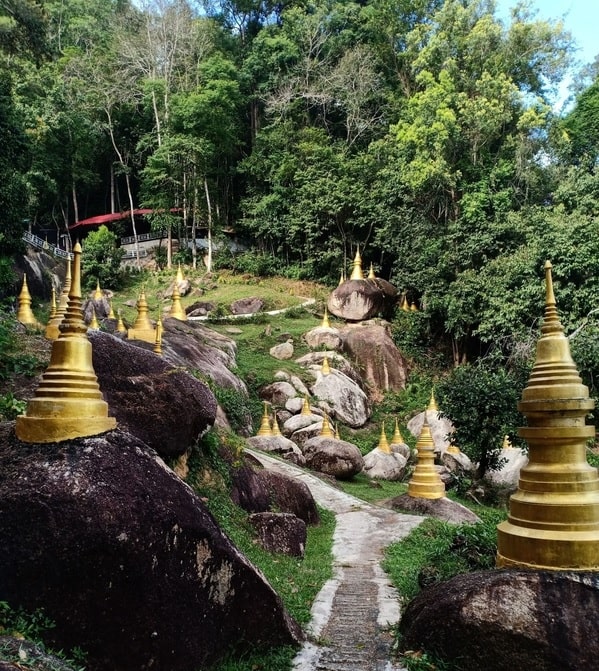