"Known for the site where the oldest human remains were discovered in Southeast Asia, Niah National Park has lots to offer to both its day and overnight visitors. The park itself has multiple caves with impressive and archaeological sites.
The surrounding area has dense primary rain forest which is home to many species of plants and wildlife. In the evening, visitors get to take a romantic walk in the moonlight and be serenaded by the symphony of sounds from the rainforest." 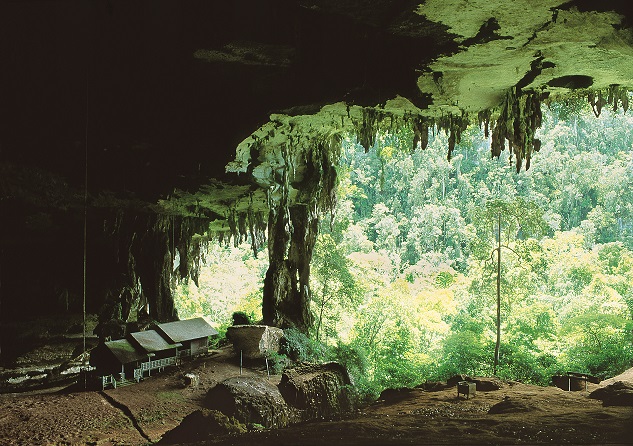 Access to these caves is via a plank walk-about 45 minutes walk-through lowland forests vibrant with birds, butterflies, numerous other insects and other flora. You will then be able to explore the Great Cave and Painted Cave as well as the archaeological sites.

Within the Park (and the massif) are the Niah Caves. The whole cave system which includes the Great Cave, the Painted Cave and the Traders’ Cave was declared a National Historic Monument in 1958 as an archaeological heritage and is now under the management of the Sarawak Museum and the Sarawak Forest Department.

Humans inhabited Niah Great Cave 40,000 years ago.
The Great Cave is Borneo's most important archaeological site as in 1958, relics of prehistoric man were discovered such as bones, stone tools, and shellornaments. You can see evidence of prehistoric inhabitants in the Painted Cave where human figures drawn on the wall watch over grave sites where the dead were laid in boat-shaped coffins.
Today, local Penan tribesmen venture into the cave to collect edible birds nests and the guano dropped by the myriad swiftlets and bats that live there.

Traders Cave comes first just before the main cave – it is a long low cave with old trading stalls made out of Belian wood (ironwood), some of them nearly 100 years old.
Then the Great Cave with its little houses and shelters. Follow the marked route into the depths of the cave system (you need a torch which can also be hired for a some money!).
It is basically a circular tour through the cave system and then head back to entrance, unless you want an extra hour’s walk to the Painted Cave, which is interesting but adds a lot of walking! The paintings were believed to be over 1,000 years old and together with these paintings, there were some small canoe-looking ships of the dead. These are believed to serve as coffins and the Painted Cave as in fact a cemetery.

Visit Rumah Chang Longhouse on the way back if you wish – it is now re-built and thoroughly modernised! They even park their cars underneath nowadays, where the chickens and pigs used to live!
The Museum at the river end of the plank walk is very interesting, though small. A lovely traditional building too!
It is open until 5 p.m. (4.30 they start shutting up!)

Niah National Park has chalets for those who would like an overnight stay to best enjoy and appreciate the park. There are two walking trails to explore and the Iban longhouse is nearby.