"We had a great trip with our children (3 and 5) loved it. Especially holding a baby crocodile. Our guide Yusri was very informative and helpful when showing us around. Would recommend this for a half day trip when in Langkawi." 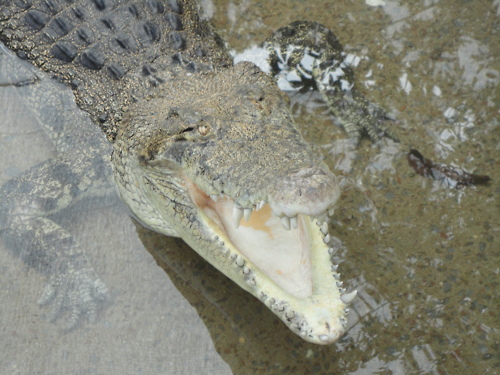 
Crocodiles have always had a great attraction for children. Children can not get enough of these prehistoric looking animals to view and see how they live. Adults also get a kick when they see how crocodiles behave and fed in their natural environment. This is why the Crocodile Adventureland on Langkawi is a hit among adults and children.

Adventureland is the place where a thousand crocodiles live, which are specifically bred and cared for. There are also a few alligators between crocodiles and some other animals, such as deer, snakes and lizards. You can see the performance of the crocodiles hourly and you can admire them. The most popular crocodile in the park Bujang Kawi. He is the oldest crocodile at the farm and he weighs more than 454 kg. Bujang Kawi was born without teeth and that is the reason why coaches are not afraid to play with him. The park is open daily from 9:00 to 18:00. The highlight of the day is the crocodile show. This is at 11:15 am and at 14:45 (check this out). The "man versus reptile" crocodile show is a contest between man and reptile. The spectators are looking amazed at this spectacular show. Especially if the trainer gently tries to kiss a crocodile. Another highlight for the kids is a rickshaw ride pulled by a crocodile 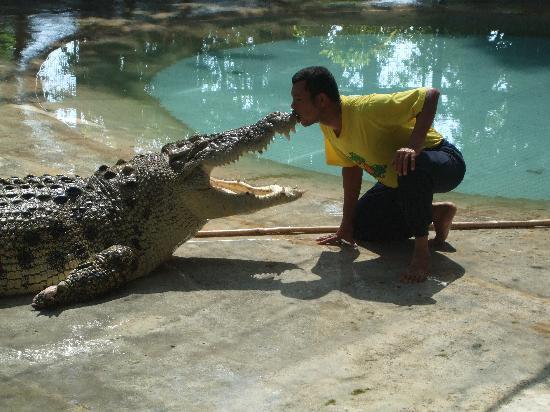 The major attractions in Langkawi Crocodile Farm are the feeding show and stunt show scheduled at different timeslots. There will be a feeding show at the Bridge Pond. The trained personnel of the crocodile farm will be go into the pond with a bucket of fishes on his hand. Blowing his whistle, all the huge crocodiles will move to his direction, waiting to be fed. This will be a very exciting show as seeing the farm personnel feeds the crocodiles in a close distance.

Opening daily from 10 am to 6 pm, the entrance fee to Langkawi Crocodile Farm is RM 15 for adult (for local visitors with Malaysian ID) and RM 10 for child.
Non-citizen visitors will pay RM20 for adult and RM15 for child.